Here at the Food on Fridays carnival, any post remotely related to food is welcome—though we love to try new dishes, your post doesn’t have to be a recipe.If you want, you could just tell us what snacks you’re taking to the Superbowl party or what comfort foods keep you cozy in winter. Basically we’re pretty relaxed over here. Posts that tell stories involving food are as welcome as menus and recipes.When your Food on Fridays contribution is ready, just grab the broccoli button (the big one above or smaller option at the bottom) to paste at the top of your post. It ties us together visually.Then link to Simply Linked. 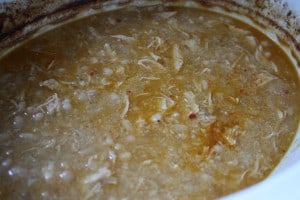 We first started attending our current church during the season of Lent. I’ll never forget the PowerPoint slide announcing the Wednesday Prayer and Fasting service. They displayed the text with a photograph of crusty artisan bread—looked like something from a rustic Belgian bakery—next to a big bowl of steaming soup.”They’re talking about fasting,” I teased, “but tempting us with that amazing bread and soup! Besides, I thought fasting was about not eating?”Apparently the leadership encourages the congregation to fast from a couple of meals on Wednesdays and then gather that evening at the church for a time of prayer, followed by a pitch-in dinner of soup and bread. It didn’t seem like much of a fast to me, but I appreciated that they were inviting the entire church to participate. I liked the communal aspect, because I’d never attended a church that encouraged its congregants to fast. For years I’d been experimenting on my own. Finally I was in a church that at least gave it a try.But then I learned that in some faith communities, fasting doesn’t always require total deprivation of food. Two of the essays in The Spirit of Food described fasting as a community event…and fasts that involved soup. And bread. 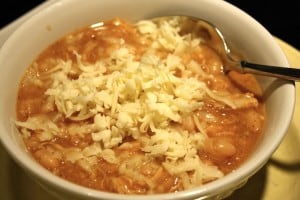 In “Fasting Toward Home,” Amy Frykholm remembers her time as an exchange student in Russia helping a history professor named Olga prepare a simple meal—a “fasting meal.” Sounds like an oxymoron to me, like a PowerPoint slide about fasting that includes tempting food photography, but Amy explains that the Orthodox don”t abstain from food altogether; rather, they abstain from meat and dairy products for four weeks before the feast of Christmas (the season of Advent) and during several other days and seasons. Olga, who was Orthodox, “prepared all her usual foods in their simplest forms: borscht with vegetable broth instead of pork, salads with oil instead of mayonnaise and sausage. She practiced this as a quiet reminder that she was preparing body and soul for Christmas” (Fields 161).More than a decade later, Amy was visiting an Orthodox monastery in Denver. She helped prepare snacks after Mass, slicing apples, placing jam in a small bowl and setting out almonds, sesame crackers, honey. This small and simple snack was considered suitable for a fast.

[T]his kind of fast wasn’t about hunger. The meal Olga served me that long-ago night in Krasnodar—complete with fresh bread, homemade pickles, and strong tea—had not been an exercise in self-deprivation. On the contrary, I had left nourished, so nourished that the moment lived vividly in my memory. (163)

She left the monastery and decided to fast on her own from dairy and meat on Wednesdays and Fridays, as the Orthodox do, concluding, “Perhaps fasting is learning to listen to the quiet whisper of the eternal—slow down, abide with me. All you need is here” (165).This year, during Lent, our church will put up the PowerPoint slide again and hold Prayer and Fasting services on Wednesdays. I’ll bring my soup that evening, and try baking some artisan bread. And I’ll join with those brothers and sisters, to be nourished.I will share with them what Amy wrote, that maybe our fasting won’t be so much about deprivation as it will be about abiding in Christ. I will read to them her words and we can wonder together if fasting is about gathering at the table to listen to the quiet whisper of the eternal; maybe this Lent we can quietly discuss how fasting is about learning to slow down, together, to find all that we need.I can ask these things as I ladle soup into my bowl, and take a second slice of thick-cut bread. 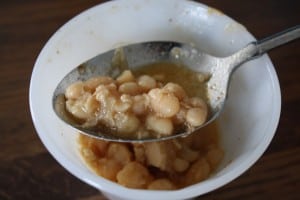 I merged two recipes this past week to come up with a variation of White Chicken Chili. I made it again this week, doubling it in order to have leftovers. To modify for Lent or other fasting days, simply leave out the chicken & half & half and rename it “White Chili.”

I cooked the shallots in oil until soft, then added flour to make a roux. Added the broth and cooked, stirring constantly until thickened. I drained the beans that were soaking the night before, placed them in the crock pot, and covered with water until the water was about an inch above the beans. I added one cube of vegetable bouillon. I tossed in the spices, the broth and shallot mixture from the pot, the chili peppers, and the chicken breasts, which were frozen. Cook on crock pot on low 6-8 hours. shred chicken with two forks. I set aside the half & half and the cheese to add at the last minute. I think next time I’ll add the half & half during the cooking.The result: a satisfying white bean chili with chicken that I enjoy at lunch or dinner with my favorite cornbread recipe. 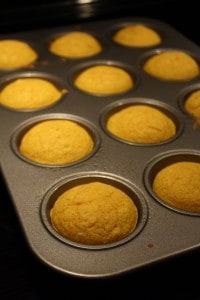 Consider joining the book club on Mondays at TheHighCalling.org where we are currently discussing The Spirit of Food: 34 Writers on Feasting and Fasting toward God._______________

Fields, Leslie Leyland (ed.). The Spirit of Food: 34 Writers on Feasting and Fasting Toward God. Eugene, OR: Cascade Books, 2010.