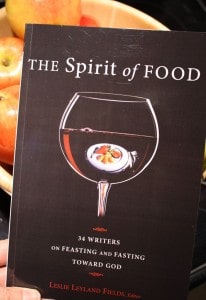 Last week’s TheHighCalling.org book club selection of essays (from The Spirit of Food: 34 Writers on Feasting and Fasting toward God) included Denise Frame Harlan’s essay “And She Took Flour.”As I followed her story of learning to eat (and eventually cook) real food, I sat almost as stunned as she did when a professor read excerpts from The Supper of the Lamb

[T]ears streamed from his eyes as he read about ‘The Inconsolable Heartburn…by which the heart looks out astonished at the world and in its loving, wakes and breaks at once.’ This heartburn, Capon says, this sadness for what is not yet here is ultimately a longing for God’s final feast, the supper of the Lamb, when the Host of Creation will set all things right and will do so more beautifully than we can imagine. (Fields 76)

She reflects on this with astonishment:

The created order cries out—I knew that from Romans. Creation groans for further greatness still. Greatness in the kitchen? Greatness as a supper? …As if it were a near-death experience, my life flashed before me … I remembered my first taste of Communion wine at midnight Mass in the Colorado Rockies, my favorite sugar cream pie, and my grandmother’s homemade noodles with chicken. (Fields 76)

Like I said, her writing—her story—left me stunned. I’m not entirely sure why I connected so strongly with her piece, but I’ve continued living with my own food recollections. It seems that each day, scenes flash before me; blurry snapshots from my history with food slowly come into focus:

Capon warns in his book that The Supper of the Lamb is a way of life, not merely a recipe that requires eight chapters of diversions to reach a conclusion. I read the book and reread it, as this way of life becomes mine. And I will tell you the truth: I’ve never grown tired of exploring the minute corners of life. I tossed a handful of lettuce seeds into the potted rosemary plan several days ago, and the sprouts stretch green leaves upward, and the anticipation grows. It might not work, but I had the seeds handy, and I was hungry for green things. I am hungry, still. (Fields 79)

I am hungry, too, for green things; for good words and good food; for bread and for truth.The Occasional VegetarianSo I read on. This week’s book club selection included “Tasting the Animal Kingdom,” in which I was taken back to my teens. 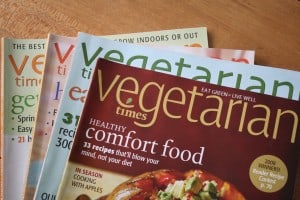 Like Alissa Herbaly Coons, I committed to vegetarianism around age thirteen. Though my dad raised Black Angus cattle, my parents—Mom in particular—supported my decision. Dad worried that I wouldn’t get the protein I needed, but Mom fixed vegetarian casseroles as a main dish for me and a side dish for the rest of the meat-eating family.At Thanksgiving that year, my beloved grandmother prepared a turkey. I was torn. Should I take a serving to honor her labor of love? Or should I stick to my vegetarian lifestyle?As I smelled the turkey and remembered how it tasted—and as I looked at my grandmother’s beaming smile—I made my decision.I took a serving of Grandma’s turkey savoring forkfuls of dark meat—alongside her noodles, of course—and I gave thanks: for turkeys and family and Grandma. I think she was pleased that I ate it all.And it was very good.These days I’m eating meat, but I’ve been known to suddenly convert back to a plant-based diet again. Each time I transition to or from the vegetarian lifestyle, I find myself appreciating all food, all sustenance, more than I would if I ate without thought and concern.I was touched as I read about Coons’ careful preparation of a chicken all the way to boiling the carcass with vegetables to make stock. A sense of reverence and gratitude flow through her story to the end:

For hours, I boiled the last nutrients out of the chicken, claiming the goodness of its skeleton for myself and for the soups of my future, a small act of faith in my slow reconversion. As I strained the brother and finally discarded the bones, I found the wishbone, whole in the pot, which had slipped unnoticed through my earlier bone breaking. I held it for a moment, and then I left it intact. (Fields 95)

Sitting in my fridge is a container of stock that I made from the turkey carcass at Thanksgiving. I froze it in November, but recently pulled it out to thaw and use in a sauce.With what remains, I will make soup. Vegetable soup.

Join the conversation at TheHighCalling.org.

Source:The Spirit of Food: 34 Writers on Feasting and Fasting Toward God, edited by Leslie Leyland Fields. Eugene, OR: Cascade Books. 2010.