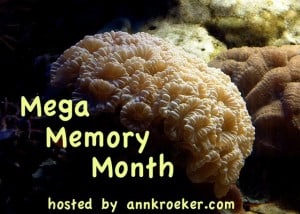 Welcome to Mega Memory Month (MMM) Progress Report #2.If you’re just stopping by, it’s definitely not too late to jump in as a Mega Memory Month participant. Just select a passage seven to ten verses (or sentences) shorter than you would have otherwise. It won’t be as mega as it might have been, but it can still be plenty big.Progress Report #1Each Progress Report is a place to encourage one another along the way and celebrate our progress. How are you doing? Has it come easily or are you facing struggles?Check in using Mr. Linky if you write a Progress Report on your own blog (you can link up any time during the week).Or just talk to us in the comments.

Get your own FREE Linky Tools

A friend told me about a memory technique that has you start memorizing the end of the passage first and work backwards.The idea is this: If you are working on a verse each day, start by memorizing the last verse first.The next day, work on the next-to-last verse and then say the two together; the next day add the verse before that and so on until you get to the last verse, which is actually the first verse of the passage.Confused?Let me use my passage, John 15, to illustrate:

John 15:27 is the last verse of that chapter: “And you also must testify, for you have been with me from the beginning.” The day I started this technique, I read that over and over until I could say it without looking.Next morning, I read through the verse right before it, John 15:26: “When the Counselor comes, whom I will send to you from the Father, the Spirit of truth who goes out from the Father, he will testify about me.”After I repeated that verse and got it set in my head, I then reviewed the two together, saying the new verse and then adding the old verse.My mind more easily integrated the two because there was a bit of logic tying them together with the Spirit of truth testifying and then the disciples also testifying.Day three, I memorized John 15:25, “But this is to fulfill what is written in their Law: ‘They hated me without reason.'” And then I reviewed all of them together.The process continues in the same way, a verse a day, until you get to the first verse of the passage as the last verse you memorize.

It was counter-intuitive to drop down to the bottom of the selection instead of launching the first verse and moving forward; but the process is working well for my brain.Plus it forced me to commit to the entire passage.When I told the family about it, one of my daughters, a flautist, said her teacher recommended that method to memorize a solo she had to perform for a music festival. “It was weird to start at the end,” my daughter said, “but it worked really, really well.”Combining this memory technique with some others—like hand motions, emphasizing key words, and writing it out—is really helping me work on John 15.Now, my whole process is complicated by the fact that I had actually worked on the first verses (John 15:1-6) before I heard about this start-at-the-end approach, so it will be interesting to see if those initial verses stick with me to the end.Here’s what I can remember (words in pink are words I left out; words crossed out are words I added that don’t belong):

If I had not come and spoken to them, they would not be guilty of sin. Now, however, they have no excuse for their sin. He who hates me hates my Father as well. If I had not done among them what no one else did, they would not be guilty of sin. But now they have seen these miracles, and yet they have hated both me and my Father. But this is to fulfill what is written in their Law: ‘They hated me without reason.’ When the Counselor comes, whom I will send to you from the Father, the Spirit of truth who goes out from the Father, he will testify about me. And you also will must testify about me, for you have been with me from the beginning.

I practiced my initial work starting at the beginning of the passage (before I dropped down to the end)—I actually worked on this a little bit during the last Mega Memory Month, so it’s coming back better than expected:

I am the true vine, and my Father is the gardener. He cuts off every branch in me that bears no fruit, while every branch that does bear fruit he prunes so that it will be even more fruitful. You are already clean because of the word I have spoken to you. Remain in me, and I will remain in you. No branch can bear fruit by itself; it must remain in the vine. Neither can you bear fruit unless you remain in me. I am the vine; you are the branches. If a man remains in me and I in him, he will bear much fruit; apart from me you can do nothing. (Then something about branches cut off and thrown into the fire.)

That’s my report!What techniques work best for you and how far along have you gotten?(Check out my Mega Collection of Memorization Tips & Techniques for more ideas.)