I must have been nine years old.

My parents hired a babysitter. For the first time ever, my sitter was Theresa, our teenage neighbor, instead of Grace, the plump and kindly 60-something-year-old woman who grew African Violets by her kitchen window and watched soap operas every afternoon.

Theresa might even play with me! My mind was wild with possibilities, but I ended up deciding to play “M*A*S*H.” If I could make a tent, Theresa could be a nurse or doctor and we could pretend to take care of injured soldiers.

I found the doctor’s bag my mom had put together with fake thermometers, a stethoscope  and bandages to play with. Then I ran upstairs and pulled out some gauzy fabric that I found in a rarely accessed closet. I’d use it to make a light and breezy tent in the living room.

After propping up a broom in the middle of the room, I centered the fabric over the end of the broomstick and then started pulling the corners of the fabric out, weighing them down with heavy objects.

Theresa held the corners until I searched hurriedly around the room for solutions—I used a few books for one corner, the leg of a chair for another.

“Are you sure your parents won’t mind you making this tent?”

“Nope! I do it all the time!” I assured her. I still needed something low and heavy for the last two corners.

I ran into another room and opened the door to a low storage cabinet. I knelt down and peered inside. Mom and Dad collected all kinds of odds and ends from auctions. Who knows what I might find under there? Hopefully something heavy enough to finish making my tent.

I moved some items to the side and reached for something stuck way in the back. As soon as I slid it forward, I knew it would work. I was heavy. Solid, yet not too big.

It was made of a smooth material, sort of chiseled or carved into an intricate pattern. I didn’t know what it was—maybe a vase—but it felt like it was made of marble. I vaguely remembered that it might have come from my grandmother, but I wasn’t sure. All I was thinking about was the tent, and this was the perfect size and weight to hold down a corner.

I brought it into the living room where Theresa was waiting, holding the tent together with a foot on one part and a hand on the broom.

“Let’s use this!” I said, showing her the item.“Are you sure your parents won’t mind?”

Honestly I wasn’t sure. Not at all. Dad got upset about a lot of things, so we never knew what was safe to try. But I wanted to play M*A*S*H, so I said, “I’m sure!”

I set the vase on the fabric. Perfect! It held everything taut enough to stay aloft without tearing it. I fixed up the last corner and we started to play.

We started unloading imaginary choppers that had flown in imaginary soldiers that we brought into the tent so we could tend their wounds. Theresa went along with everything. The tent was very tight for one person, let alone two. I scraped against the fabric, tugging it as I bustled around.

The vase. The vase! The solid, smooth, carved vase had fallen over.

It broke clean in half.

This couldn’t be happening. When things broke at our house, Dad got furious, and here was this green thing. This big heavy carved thing that may have come from his mother.

I acted like it wasn’t any big deal so that Theresa wouldn’t suspect anything. I joked about it and said it was some old thing they didn’t care about. “I’ll just stick it away.” I could barely stand to look at it. I was shaking when I picked up the two pieces, but I set the top on the bottom. They fit together perfectly—I could hardly see the break. I set the vase in its spot way in the back of the cabinet, the top resting on the bottom. It seemed stable, so I left it there, repositioning everything the way it was before.

My heart was pounding. Would Mom and Dad find out? When would they discover it? They rarely opened that cabinet and things could remain untouched for years. I took a deep breath, closed the cabinet, and returned to the living room. I told Theresa I was done playing M*A*S*H anyway; that I wanted to play Barbies instead.

When Mom and Dad came home, and all I could think about was the vase. My face was flushed, I’m sure, and my heart was still beating big.

Nobody said a thing about the vase. Theresa must not have mentioned it.

Next day, nothing was said. I relaxed a little but still felt the rush of fear each time I thought about it—the heat of guilt seemed to rise within each time I passed the cabinet, imagining the broken vase inside, wondering when it would be discovered.

Time passed, and the fear faded. I didn’t think about the vase that often. I could pass the cabinet without a lump of panic rising inside. But the dizzying possibility that Dad might question me about it remained. If he found the vase—if he asked who broke it—what would I say?

More time passed—I don’t remember how long. Weeks, maybe months. Could have been a year. But at some point, they discovered the vase.

Dad was angry. So angry. His voice thundered:  Who broke my mother’s vase? He questioned my brother. Did you break it? My brother didn’t know a thing about it.

With only two kids in the family, I was the only one left to ask. I was so afraid—what would Dad say and do if I admitted my guilt? He was determined to get to the bottom of it. I thought I might break in half just standing there.

He turned to me. Did you break it?

So stupid to lie! Obviously I was the one! They asked again, maybe multiple times. Somebody broke it! But I continued to deny it. I must have added something convincing, something like, “I’ve never seen that thing” or “Weird—I wonder how that happened?”

Somehow, I got out of it.

They put away the vase, and I didn’t get blamed.

But I had to live with myself.

I broke it. And I lied about breaking it.

I felt another wave of guilt.

I went to college, but I didn’t tell even then.

I got a job after graduation and worked for a church. I got married a few years later, when I was 24 years old, and still, I never told.

Then one day—I may have been in my upper 20s or into my 30s—I went to my parents’ house for a birthday party or something.

And there, on a side table, stood the vase. 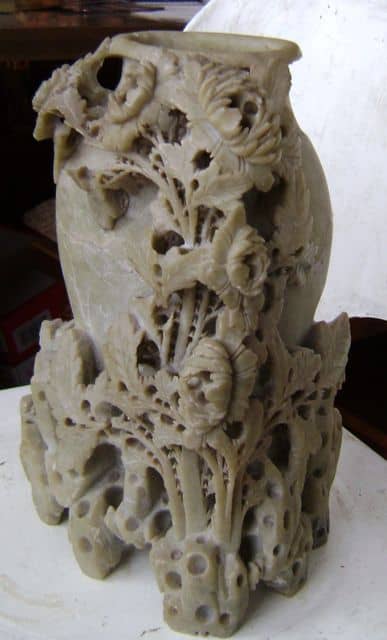 Nobody was in the room, so I walked over and touched it. I lifted it very carefully by the base. Somebody had glued it together. You couldn’t see the break at all.

That familiar haunting sense of guilt shot through me just looking at it. But after all these years, should I admit my guilt? It was so long ago.

I pointed to the vase when my mom came in the room. “Hey, what’s this?” I asked, as casually as possible.

“It’s Grandmother’s vase,” she said. “It got broken years ago. I think it’s made of soapstone, and that’s kind of a soft material, but we never did figure out how it broke.”

Dad came in the room and sat on a chair, relaxed and casual.

I took a deep breath. “I have something I need to tell you,” I began. I decided to just get it all out, all at once. “When I was little, I was playing in the living room, making a tent. I needed something to weigh down the corner, and I found this vase. I used it, but it tipped over and broke.”

“Yes, I broke it. And when you asked me, I was so scared of what you would do that I lied about it.”

Photo of the actual vase taken by Lynn Hopper.