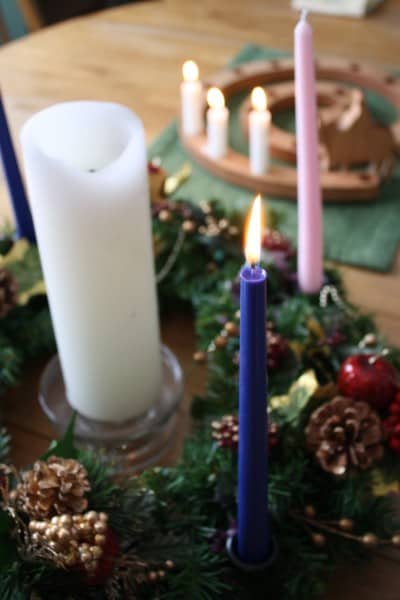 I don’t know why, but right before Advent begins each year, as I’m packing up the turkey teapot for storage, I suddenly realize I don’t have candles.

Our traditional Advent wreath calls for taper candles, and I prefer the traditional colors: three purples and one pink. The white Christ Candle in the center is my wedding unity candle, so we reuse that year after year, but we always need replacement tapers.

And I always forget until the last minute.

And then I end up scouring the city for them.

I went to Michael’s, a craft store that carries a nice selection of candles. All they had, though, were red, green and white Christmas candles and a few tapers in odd colors. No purple. No pink.

Risking life and limb at Wal-mart on the Saturday after Thanksgiving, I slipped in to search for purple and pink candles. They only had warm fall colors on sale and a new display of fake pine-scented green candles mingled with red and white.

I tried Target—no tapers, no pillars.

I even drove to two different grocery stores in search of purple and pink candles, but none could be found. I started to feel a little upset that I was letting the family down.

So I set my sights on Hobby Lobby, a gigantic craft superstore. It’s a Christian store, too—surely they would have Advent candles. They might even have a pack of Advent candles on display front and center!

Yes. Hobby Lobby would deliver! I just knew they would save the day!

I raced in and stared at the warehouse-sized space, jostled by eager crafters whizzing past, their carts piled high with knitting yarn and Christmas sale items. Which way for candles? I lost valuable time passing through jewelry-making aisles and scrapbook supplies.

Then I spotted the candle display. I picked up my pace. Lots of people were browsing.

I found taper candles—I even located a bin labeled “purple,” but it was empty. Not one purple taper remained.

So…other Advent shoppers have already been here, I surmised. I am not the only procrastinating Christian.I turned the corner and found pillars of all sizes and colors. Scanning them quickly, I found a tall cranberry colored pillar. I considered it for a moment.

Close. Very close. But not quite.

I glanced down. There, directly in front of me: three purple pillars.

Hm…they aren’t as dark as I would have liked—darker than lavender, but lighter than the deep liturgical purple I was looking for—I hesitated, studying those candles for just a moment, trying to imagine our family gathered around chunky pillar candles for Advent instead of tall, elegant tapers.

But they are purple. And I need something for Advent.

Then I decided. Yes, those will do. I’ll take them.

Just as I lifted my arm to take hold of the candles, another lady reached right in front of me and snatched them, one after another—one, two, three—and placed them in her cart.

I looked up at her in astonishment.

I’m ashamed to admit this, but tears welled up in my eyes. She got the last three purple candles in the entire city.

But I knew it would be ridiculous irony to be jealous about her Advent success. I decided she must have needed those candles worse than I did. I tried to work up the nerve to say, “Happy Advent,” but she was hurriedly wheeling her cart away, making a call on her cell phone. Besides, she might mistake it as sarcasm, so I kept quiet and stared at the empty space where the purple candles had stood just seconds before.

I walked slowly out of the store and drove home empty handed.

That night I decided to order some sets of Advent tapers from CBD (Christianbook.com). Though it was anti-climactic after my determined search, it seemed like a good idea. In fact, I bought three boxes, so that I’d have some extras on hand for the next two years. 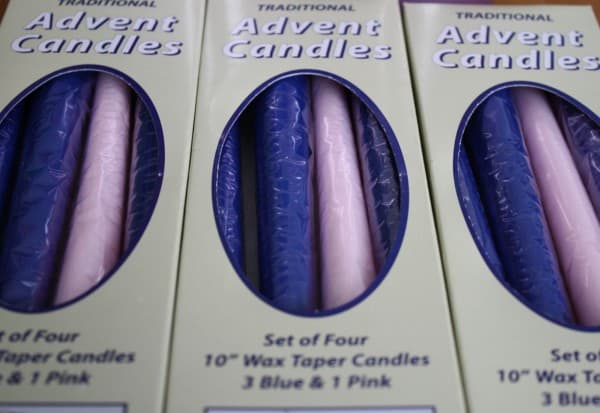 The day they arrived, the kids ran up and said, “You got a package, Mama!”

I saw Christianbook.com stamped on the outside. “Oh! It’s the Advent candles!”We slit open the box and pulled out the candle sets. One of my daughters helped unpack them and place the tapers in the wreath.

“That looks nice,” I observed. 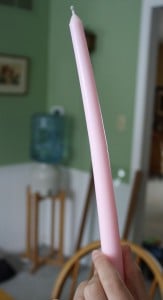 Sure enough. Instead of purple, I had purchased three sets of Advent tapers containing three dark blue candles and one pink.

She held up the pink. “And the pink is broken.”

I sighed. “Nothing’s quite right,” I said. “Just about everything having to do with our Advent countdowns is messed up or broken.”

She waggled the pink candle. “Should I pull out a pink candle from one of the other packs?”

“No, no. We’ll use it,” I said. “Nothing was quite right for Jesus’ birth, either, from a human perspective. We’ll use the broken ‘joy’ candle.”

My daughter stuck it in the wreath. We stepped back and agreed. 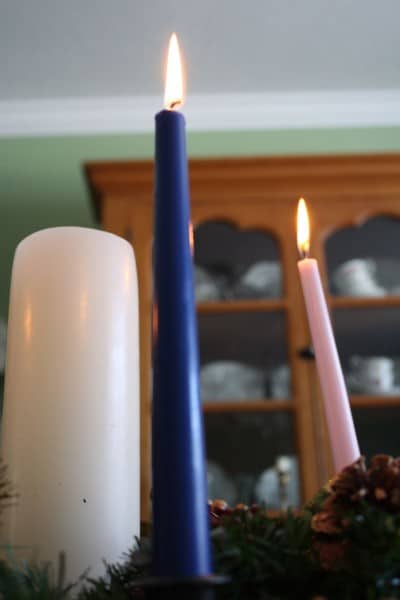 Postscript: You may recall from my earlier Advent post that most of my ideas came from online Catholic homeschooling friends. Well, it occurred to me today that I should see if the Catholic bookstore, which I’ve never set foot in, carries packs of Advent replacement tapers. I phoned them today.

“Holy Family Bookstore. Can I help you?”

“I know it’s late in the season, but I’m curious: Do you have packs of Advent candles?”

“You still have them? Right now, in stock?”

“A pack with three purple candles and one pink?”

“And the three…they’re purple, not blue, right?”

“Oh, my goodness. I searched far and wide for these, and you had them all along!”

I continued, “I may come over and buy some this very day. You have plenty on hand?”

“We have plenty on hand. Some people do plan ahead and stock up on these for next year.”

I laughed. “Now that is a very good idea!”