“Shhh…” One of the older girls hushed her brother as we prepared to light the second candle of the wreath. “Stop making weird noises. We’re ‘Adventing’!” 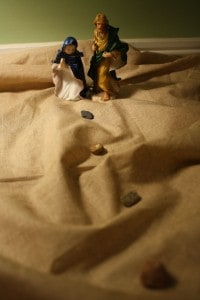 Yes, we are Adventing in a big way this year, with multiple countdowns in progress throughout the house.First, there’s the Journey to Bethlehem tradition that I told you about when describing how Advent first came to our home ten years ago.That scene is set up on a side table in the dining room. The kids take turns moving Mary and Joseph forward one stone per day.This year we’ve added something new: 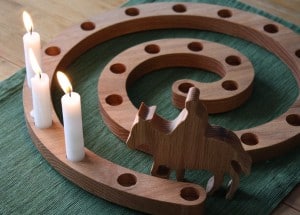 We invested in “The Way of Light” wooden wreath, designed for use from Advent to Ascension by Ann Voskamp’s son, who makes each one by hand.I ordered one, and Ann kindly brought it to me when we met up in Texas.This is our family’s first year to use the wreath, though I’ve known about it since I first saw it on Ann’s website in a photo that showed her daughter gazing at it, face aglow like a cherub’s in the candles’ dim light.The simplicity of this wreath is brilliant.It’s set up in the middle of our kitchen table, where we eat most of our meals. As we move those candles forward and light them each day, we use Jesse Tree symbols to spark conversation during and after dinner. Sometimes I read straight from Ann’s devotional; other times we simply talk about how the symbol—and the passage from God’s Word—points to Jesus. We pray together before blowing out the candles.Then there’s the Advent wreath. 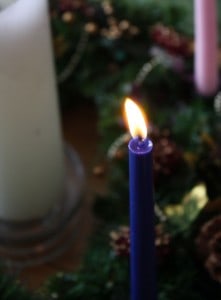 Each Sunday after church, we light another candle on the Advent wreath and enjoy a simple devotional.Based on my Internet research (which for some reason I do again and again, year after year), the symbolic color and meanings of the Advent wreath candles vary.The fifth, center candle, the “Christ Candle,” is white and represents baby Jesus Himself, to be lit on Christmas Eve or Christmas Morning.But the meaning of the four candles that surround the Christ Candle seems to be up for grabs.For example, the candles around the circle could represent: Prophecy, Bethlehem, Shepherds, Angels; or Hope, Love, Joy and Peace; or they could even represent people, like the John the Baptist, the shepherds or magi, Joseph, and Mary.If, like us, you’re relatively new to Advent, and your church doesn’t do much for Advent, how do you pick?I’ve concluded that you ought to just go for it…pick a set of four meanings that fall under the overall theme of “waiting,” and don’t fret too much.I say this to you because I think I fret way too much, and I’d like to save you some fretting…so you can get busy Adventing. 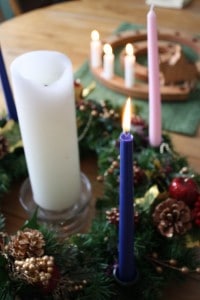 One idea I had for our devotionals best fit with the shepherds, but I forgot which candle was which, so I just did it today.We talked about how the shepherds were just going about their work, minding their own business, hanging out in the fields like they always did, day after day; night after night; same old, same old.And then, in the middle of their same-old—out of nowhere—an angel of the Lord appeared, and the glory of the Lord shone around them.The shepherds were terrified, but the angel said:

Do not be afraid. I bring you good news that will cause great joy for all the people. Today in the town of David a Savior has been born to you; he is the Messiah, the Lord. This will be a sign to you: You will find a baby wrapped in cloths and lying in a manger.”Suddenly a great company of the heavenly host appeared with the angel, praising God and saying,“Glory to God in the highest heaven,and on earth peace to those on whom his favor rests.” (Luke 2:10-14)

Can you imagine?That great company of the heavenly host, praising God, must have blown them away; but I think it’s hard for us to imagine today what that might be like.Then I thought of something that might give us all an idea of what it would feel like to be taken completely off guard like the shepherds.The Belgian Wonder and I showed the kids this video, which I’ve managed to keep hidden from the kids until today:I’ve already seen it at least three times, but it was the first time the kids saw the girl on her cell phone nail those first clear, bold notes; the guy in the sweatshirt jump onto the chair to break out in song; and the janitor leap in to join the chorus with his yellow “Wet Floor” sign held high.The kids were delighted, laughing and pointing out each wonder-filled, unexpected “moment.”It was a complete and utter surprise to all the people who were just going about their day; discussing their purchases; eating their Subway sandwiches; minding their own business; same old, same old.Out of nowhere, a heavenly chorus starts singing to the shoppers, “Hallelujah!”Out of nowhere, a heavenly host said to the shepherds, “Glory to God in the highest heaven!”If “Adventing,” so to speak, is about waiting…we Kroekers may not be waiting very well.We started out well when we lit the Prophecy candle the first week, recalling the long, dark wait of God’s people as they held on to promises from the Father.But today, at only the second candle, the big news has already slipped out: Joyous, unexpected, impossibly glorious news for all people—a Savior has been born!It’s okay, though. As we continue to journey toward Christmas, as we’re Adventing, we already know the good news.