After Wendell Berry finished reading “Manifesto: The Mad Farmer Liberation Front,” his handlers—an English professor or two—whisked him away to a book signing table.

I walked up to Maurice Manning to introduce myself. I explained how I remembered him from the Writers Colloquium where Haven Kimmel was the keynote speaker.

Charity was standing off to the side, so I motioned her over and introduced her. Because she and I had been separated during the reading, she had no idea who he was or why I was talking with him—and I didn’t have a chance to explain to her that he was single.

I can be impulsive, zany and something like a schoolgirl at times, but I decided to stop short of tacky and refrained from mentioning to Maurice that she was single. So we were just three civilized adults chatting about Wendell Berry.

“Are you ladies from around here?” he asked.

“No,” I explained, “we drove down from Indianapolis.”

“Thanks! We’re delighted, too,” I replied. “What a treat to hear Wendell Berry in person. I heard—I don’t remember where—that he doesn’t get out that much, so we thought we’d better take advantage of this appearance, as it may be a rare opportunity.”

Maurice kind of shrugged, as if that weren’t entirely accurate.

“He doesn’t like to travel, that’s true, but he gets out,” he said. “He does a lot of appearances in Kentucky.”

“Really? How about that!” I exclaimed. Charity stood nearby, holding back as I continued my chatter. 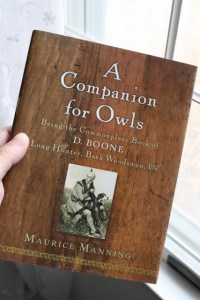 “Yes, yes, that was me, but what did you say your daughter was reading?”

“The Narrative of the Life of Davy Crockett.” Or, actually, I might have accidentally inserted Daniel Boone’s name in place of Davy Crockett’s, which may have added unnecessary confusion to the conversation. In either case, I think he would have responded the same:

“What kind of class is she taking that she would be reading that book?” he asked, surprised.

“It’s an American Literature class that follows along with an American History class. They like the students to read source materials whenever possible.”

“That’s just…that’s amazing. And how old is your daughter?”

“Wow. What school does she go to?”

“We, um, well, it’s a co-op…a homeschool co-op where she takes several classes.”

“That’s just amazing. What an education! If she’s reading books like that—the students coming in to my creative writing classes, they just don’t read history like that in high school anymore. It’s filtered for them.”

“Yes…your daughter, if she’s reading books like that, she’s going to learn to think for herself. When she graduates, though, she’s just not going to be able to relate to the kids coming out of public schools. She’s going to have to go to a special kind of college.”

“It doesn’t have to be an expensive school, either.”

“Really? What do you mean?”

At that moment, Scott Russell Sanders and a tall, slender, white-haired woman walked up to us.

“Of course!” he replied.

The two shook hands as Scott explained, “I asked her if she knew Maurice Manning, and she said she remembered you well.”

Maurice gestured to the two of us, inviting us into the conversation. “These two ladies drove down from Indianapolis for the reading tonight.”

I held out my hand to Tanya, who stretched out hers warmly and with an air of confidence.”I’m delighted to meet you,” I said. “I’m Ann Kroeker, and this is my friend Charity Singleton.”

We shook hands, and then I turned to Scott to introduce myself and Charity to him. “Scott,” I said, “I was a student here in the English department—an English major—and somehow I never had a class with you! It’s one of my biggest regrets in life!”

He joked about it, saying that countless students made it into adulthood without having a class with him and managed to do well in life.But I really do regret not having him as a professor.

Charity motioned for me to make a graceful exit at this point, but am I graceful? Apparently not. It seemed to me that Scott Russell Sanders and Tanya Berry seemed pleased to include us in their conversation for a few minutes, and I wanted to linger as long as possible. 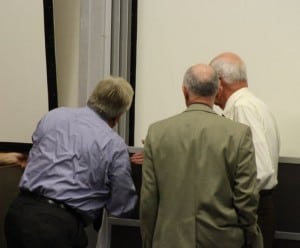 Scott said that the night before was packed. I told them I was there, too, that I’d come down with a different friend. Scott said there was a moment before it all began when Wendell and Wes were trying to hang a poster with a rope, and Wendell disapproved of Wes’s knot. Wes wanted to raise it by hand, pulling the rope; Wendell wanted to use the chalkboard that went up and down automatically with the push of a button.

“Wendell wanted to use technology?” I exclaimed. 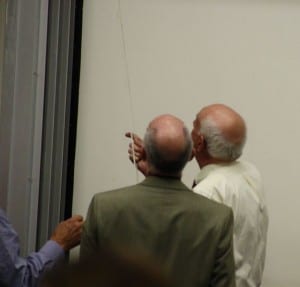 Scott grinned and continued. “They ended up going with Wendell’s knot and his plan to use the chalkboard, but then the button wouldn’t work when it was time to raise it.”

We chatted some more and before long, even I could see that Maurice wanted to talk with Tanya. Scott excused himself and so did we, saying again how pleased we were to meet everyone.

Charity and I walked out of the building into the unusually warm night air.

“I didn’t have a chance to tell you this,” Charity said, “but while I was sitting there tonight, I actually thought to myself, ‘I’d really love to meet Tanya Berry.'”

“Really. That was great.”

“Wow, Charity. And I love how it all came together,” I mused. “It really happened because we got up to give that older couple our seats. I ended up with the view from the table, which allowed me to see Maurice Manning and decide to introduce myself and then introduce you. You do know he’s single, don’t you? And he’s got land in Kentucky!”

She laughed.”Well, anyway,” I continued, “if I hadn’t seen Maurice and introduced myself to him afterward, we wouldn’t have been standing there when Scott came up with Tanya. But I did see him, and you did get to meet her, and I just love that it happened like that!”

I told Charity I wouldn’t mind moving to this university town. I’d love to go to readings and audit classes. I’d love to be intellectually stimulated and have a chance to hang around writers who push me to improve my craft.

There was a pause.

“But we can do that for each other, can’t we?” Charity quietly suggested. “I like to think that we can read great books, and talk about art and writing, and help each other improve and learn and grow.”

As we drove away from the university town, north to the city along the highway that cuts between farm fields and woods, I knew she was right. We can do this—we can help each other improve, learn and grow as writers and thinkers.

We were, in fact, already doing it.

After all, didn’t we just take a road trip to hear Wendell Berry?