Charity and I made plans to drive down to the university last Thursday, leaving late in the afternoon. We would be cutting it close to get to the Wendell Berry reading by 7:30 p.m.

I told Charity about how packed the event was the night before; how it was standing room only and we barely got seats. I asked if she was okay sitting on the floor or standing in the hallway. Would she still want to go, even if our situation was less than ideal?

She said yes. Definitely. You see, Charity has read just about everything that Wendell Berry has ever published.

So we drove the hour-and-a-half to the university, parked about three blocks away, walked briskly onto campus, and located the room.

We rushed in and found it about half full. Lots of people saved seats, but we found two together at the very front, way off to the right of the stage.

“The angle will have us looking at his profile,” I analyzed, “but it’s pretty good. I guess I can’t complain–at least we have seats!”

“I think we came at the exact right time,” Charity observed.

The two seats in front of us were occupied by young men who appeared to be tech crew types. They got up and went to fiddle with the sound equipment after sticking a wrinkled manila envelope and a piece of paper on their two seats, to save them.

While we waited, I snapped a few pictures. 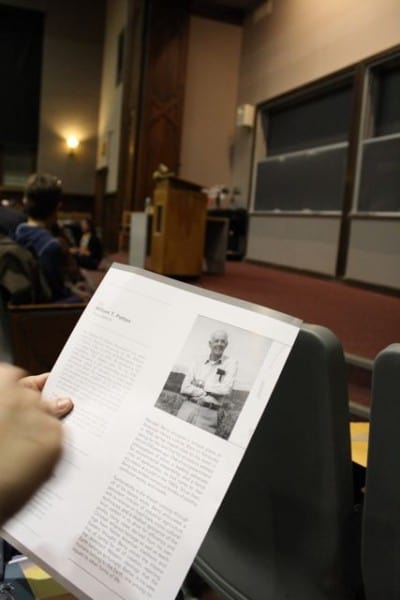 Charity perused the program and posed for me. 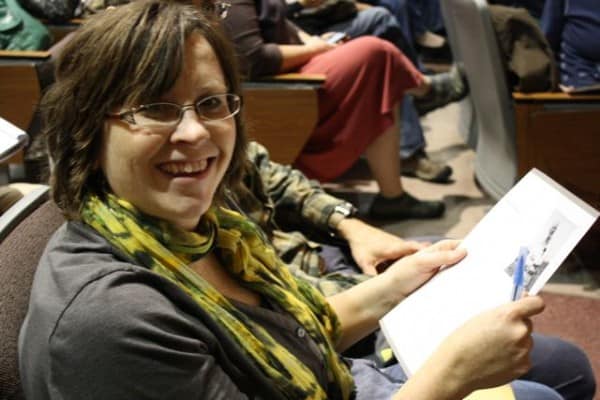 Numerous people passed by in search of seats and asked if the two seats in front of us were saved. We shrugged. “Two guys stuck pieces of paper on them, so I guess they’re saved,” I said. The people would nod and move on.

As the room filled up, I showed Charity some of my photos from the night before that were still on my camera. Then I noticed a gentleman on the stage.

“Hey, wait! We don’t have to stare at these snapshots when we have the real thing in front of us!” I indicated she look to where Wendell Berry stood at the podium shuffling papers and sipping something plum colored.

We were pretty pleased with our location at this point, speculating as to what he was drinking (prune juice? pomegranate?).

Just then, he turned from the podium and started walking right over to us! He came up to the seat directly in front of Charity—the one with the manila envelope perched on it—and looked us in the eye.

I smiled. “Well, hello there!” I chirped.

He raised his eyebrows slightly, grinned, glanced at both Charity and me, and nodded.

Then he sat down. Right in that saved seat. Right in front of Charity.

The guy sitting next to us looked our way with big eyes. We looked back equally astonished—my mouth was a big “O”, as if emitting a silent “canyoubelievethis?” gasp.

We were inches away.

Charity could have given Wendell a little shoulder massage or plucked a hair from his tweed jacket.

We started snapping all kinds of pictures to prove how close we were. Charity wanted one showing his face, but missed what might have been her one chance. I got lots of the back of his head. 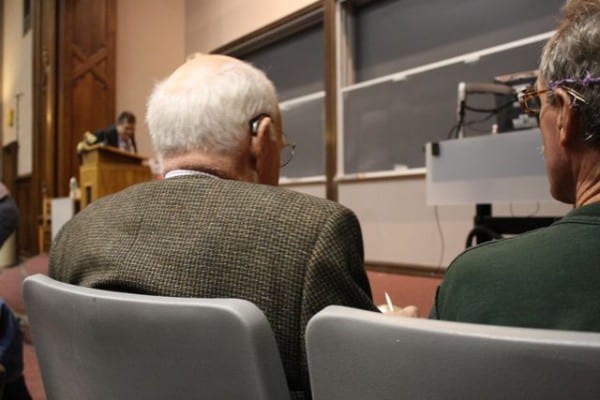 We could have handed him a tissue.

We could have tapped his shoulder and asked him for a tissue.

I sat up in my chair, leaned forward a little bit, and captured him signing someone’s book. 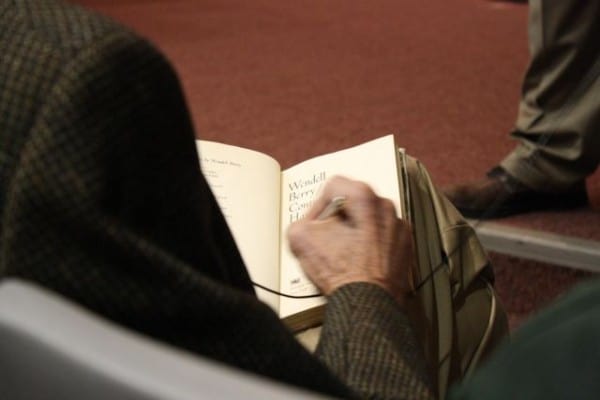 Charity wanted to snap a picture that showed his face and was so disappointed she missed that one moment.

“I’ll pretend like I’m texting,” she said. She held up her phone and pretended to tap away when she actually had her camera phone poised to click.

I thought of how Wendell eschews technology and found the situational irony particularly amusing.

She turned her phone toward me, smiling big.

“You got it!” I whispered. We felt a little childish about the whole thing, but only a little.

As the program was about to begin, an elderly couple came in. The woman looked to be about the age of my mom; the gentleman, tall and slender, appeared older and more frail. I would guess that the woman was in her mid- to late-70s and the gentleman was in his early to mid-80s.All those college students, young men and women, filling the room, and nobody got up to offer their seats.

The woman lowered herself to the floor and sat cross-legged. She was more flexible than I! Still, she needn’t sit on the floor.

“Someone should offer them their seats,” I whispered to Charity. “If no one else gets up, I think we should. What do you think?”

I got up and went to the lady, “Would you please take my seat?”

“No, no. I’m fine…but I am concerned about him,” she said, gesturing to her husband. “He’s a little…unsteady. Can he have your seat?”

“Of course!” I replied. The gentleman was leaning against a table alongside the wall. I crossed over to him and said, “Would you please switch places with me?”

He glanced at the chair and looked interested, but chivalry seemed to kick in. “Oh, no, I’m fine right here,” he said. “I’ve got this table to lean on. You keep your spot.”

“I’m sorry, but I insist!” I said. “You take my place, and I get the table. I absolutely insist. I like to perch.”

He squeezed around me and stepped through the people who were packed in all around us, sitting on the floor. When I set my bags down and turned around, I saw what happened. Someone behind us had given up her seat at the same time I vacated mine. The gentleman ended up taking that seat, and the impressively spry lady popped up into mine.

Charity had tried to offer hers, but things were momentarily confused and crowded. The spry woman blocked Charity’s path, but because the gentleman got the seat in the row behind us, it all worked out perfectly for the couple and for Charity.

Even for me, because I ended up with a unique vantage point, free to study the crowd as I listened to Wendell read from his unpublished work.

Charity described the event well in her recent post. Please click HERE to enjoy her more refined, literary, focused, mature and concise version of our outing (she includes observations on his content).

Wendell began reading from his work, inviting us to a different time and place. At one point he sang an amusing little ditty that appeared in his piece, and a guy two rows behind Charity cracked up so much more than everyone else, he caught my eye.

He looked familiar. Where had I seen him before? Then I remembered meeting and chatting with him at a writing event in 2007 where Haven Kimmel was the keynote speaker. He led one of the breakout sessions. I figured out his name later: Maurice Manning.

When I met him in 2007, I learned that he teaches creative writing at my alma mater. I asked him about MFA programs and his opinion about whether I, at my age and stage of life, should consider pursuing one (he didn’t advise it, by the way, but not because of my age and stage of life…at least, I assume that wasn’t the reason). As we chatted, I learned that he was single and owned some land in Kentucky.

Hm, I thought as I sat there on the table recalling all of this. Charity’s single; he’s single. She grew up on a farm and is committed to organic gardening; he’s a part-time farmer. She’s a writer actively developing her art and actually did some work toward an MFA; he’s a poet on the faculty of a major university’s creative writing program. Yes, I’m going to introduce myself again and make sure he meets Charity.

Oh, did I forget to talk about Wendell’s reading? I did, didn’t I?

I was distracted with this whole Maurice Manning recollection and by a girl sitting right next to me—she was kind of under my feet from where I was perched on the table—who texted and tweeted and Facebooked on her Blackberry all through Wendell Berry’s reading. Again, the situational irony was not lost on me.

The girl sitting next to the Blackberry girl, however, seemed enthralled by Wendell Berry. Surely she’s in the creative writing program.

Oh, yes, I was going to tell you about Wendell’s reading.

In the story—through story—he elegantly, gently, artistically touched on many of the same themes he mentioned the night before: the value of hard work; the worth of farming; the freedom of simpler times; and how rural lifestyles are fading away, and household thrift is a lost value.

The most memorable scene he described was of a young Andy Catlett chasing a curious young squirrel from tree branch to tree branch. So enchanted with the idea of actually catching the little creature, he climbed and climbed all afternoon, completely forgetting anything else, including the fact that the sun was setting and his evening chores needed to be done.

Charity suspects that the young Andy Catlett is closely aligned with a young Wendell Berry…and as Mr. Berry read from the podium, pausing only to sip occasionally from the deep plum beverage, he seemed almost to be in the tree.

It’s possible he was never actually there, that he fabricated the scene for this fiction, but we think he was there, actually there, years earlier, young and spry, swinging himself from the lower tree branch to the next one up, following the squirrel that paused periodically to watch and tease.

After the reading, he kindly offered to answer a few questions.

One person asked about the idea of place. How does a person find a sense of place when he doesn’t have the luxury of owning a piece of land?

And I may have heard him wrong, but I thought he said something to this effect: Anyway, if you stop and it doesn’t seem like it’s the right place, stay and see if it can become the right place.

Then someone in the back stood up and said that his grandmother introduced him to Wendell’s poetry years ago. She was ailing, quite possibly in her last days, and the young man wondered if Wendell would do the honor of reciting her favorite of Wendell’s poems, “The Manifesto: The Mad Farmer Liberation Front.”

Mr. Berry didn’t know it by heart, but a woman in the audience had a book of his poems. “I have it!” She flipped to it as she walked to the stage. “Here it is!” She handed him her book, and Mr. Berry read his poem, which builds and offers little punches and builds more and ends with the line, “Practice resurrection.”

On that triumphant note, the reading officially ended.

If I knew how to end a blog post, I’d stop right there.

But don’t you want to know what happened with Maurice Manning?