Food on Fridays yesterday was not labeled as part of the series “Scenes from Texas: Part Three,” but in it, I mentioned some of the food consumed at Laity Lodge, so let’s include it. Parts One and Two were on the humorous side, each including several scenes. Here is Part Four. Only one scene.Scene 8: Ashley Cleveland 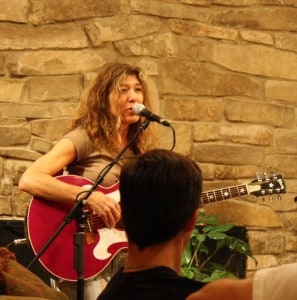 Ashley Cleveland led us in worship at the Laity Lodge writers retreat, belting out hymns and songs in her smooth, rich alto voice.By this time, the pre-retreat meetings for our The High Calling team of bloggers were over.Joining us were songwriters, poets, novelists, memoirists, artists, and authors of creative nonfiction—all gathering at Laity for the writers retreat.The dining hall was full; the Great Hall was packed. In the days to come, we would interact with these people about poetry, fiction and nonfiction in workshop settings.But for that moment, I was in the Great Hall, standing off to the side, still trying to find my place. At a practical level, I needed to find my place in the room—I’d slipped in late with L.L. Barkat and we couldn’t find a seat, so we leaned against a ledge remaining somewhat less engaged.But I also wondered how I would find my place in a relational sense.Soon enough, Ashley’s comfortable, conversational style drew us in. L.L. motioned for me to join her as she moved toward the front seats where she would perch on a strong side table. I held back a minute, unsure I wanted to be that close.Then Ashley started talking about an old friend of hers she used to tour with. She said his name—Rich Mullins—and I involuntarily squealed and waved my hands in the air.”That’s right, honey, you raise those hands for Rich!” Ashley said with a sweet smile.I sheepishly lowered my hands. I was just excited to hear his name, to meet a friend of his, to hear her sing his music in this place where I was feeling a tad awkward. But I was warming up. In fact, I moved closer and sat cross-legged on the floor.All the while Ashley spoke about Rich Mullins, she was strumming, strumming, strumming. Obviously she was preparing to launch into one of his songs, but I couldn’t figure out from the strums which it would be.Rich, she said, saw God’s handiwork all around him…and in his music, he helped us see, too.Then I knew.She taught us the chorus to “I See You” so we could join her.She sang:

Click here to watch an old Rich Mullins version of “I See You” that begins with native Americans reciting Scripture in their languages and appears to have been filmed on a reservation.