In Part One I posted about San Antonio, the Alamo, and Pee-wee Herman. Today, it’s scorpions and hammocks, fusion of horizons and the merger.

We arrived late to Laity Lodge.As the rest of us were unpacking and arranging our things, Deidra calls out, “There’s a scorpion out here!”I grab my camera and join her at the front door. “There,” she points. 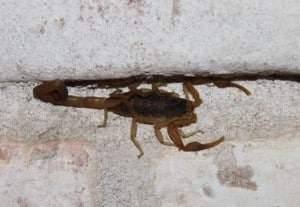 A little shaky, I quietly creep onto the porch, wondering if the scorpion might leap off the wall and onto my person with stinger poised to strike.I live in a Midwestern suburb and know nothing of scorpions. Are they aggressive? Do they leap?I dare to move in close to snap the picture and then rush back inside, shutting the door firmly behind me. I check to be sure it is secure. Twice.Despite my scorpion security measures, Deidra finds yet another one the next morning…in the house…in her shoe.Dena Dyer, lifelong Texan, whacks the scorpion with the heel of her own shoe, killing it in one strong blow…maybe two.We midwesterners (and Canadian) are impressed.We look up to her as a fearless warrior.She is now Dena Dyer: Scorpion Slayer. 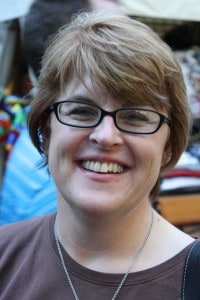 Following the scorpion encounters, Ann Voskamp and I peer into our shoes with apprehension and dread. I nervously shake mine per Dena’s instructions. We listen to all she says about scorpions and shoes, yet two full days pass before I—naive and distracted midwesterner that I am—realize that I ought to be zipping shut my suitcase after gingerly removing and shaking out each item of clothing.I am, by God’s grace, spared. 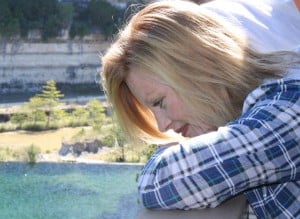 Instead of coping with post-traumatic-scorpion-slaying-stress-syndrome (PTSSSS), she apparently woke early to jog, and after showering, spent substantial time in the hammock resting, reflecting, admiring and praising God for the glorious creation around us.This is always easier for someone oblivious to scorpions.But the blissful look on her face inspired me to climb into the hammock later and sway a while.

(photo credit: Laura Boggess)But…the sway time is cut short.Moments later I must arise and head to the main hall for a meeting.

We meet as a team and hear about the history and vision of Howard E. Butt, Laity Lodge and Foundations for Laity Renewal.Then the leaders prepare us for the site merger that will combine High Calling Blogs (now obsolete) with The High Calling.Dan Roloff leads one of the presentations and tosses out the phrase a “fusion of horizons,” saying it has to do with hermeneutics. I scribbled down his brief explanation.When a piece of writing is created, the author has something her or she intends to communicate.But the words themselves have their own definitions and shades of meaning. Hopefully the selected words and phrases reflect the author’s intended message—but they may not.Then there’s the reader, who runs the piece through his or her own grid of prejudices, experiences and understanding (or misunderstanding). Just as the selected words may or may not accurately capture the author’s meaning, this reader’s conclusion as to the purpose and meaning of the piece may or may not be the same as the author intended.These three “horizons” are, ideally, fused; thus, a fusion of horizons.I’m sure it’s more complex than that, and I may not have understood what Dan meant—our horizons may not have fused—but I thought about the basic idea quite a bit. Communication, I concluded, is a challenge. It’s hard to know if you are on the same page.Speaking of being on the same page…

One night, LL Barkat showed us this video.This is very much like the online community of The High Calling, each of us creating beautiful music somewhere in the world, listening to the others, blending, harmonizing.With our distinctive styles and rhythms, we sing and play, laugh and weep, pour ourselves out and share with one another.Layer upon layer adds rich detail, unexpected beauty and joyful celebration as we stand by one another.This week, our two websites merged to become one—The High Calling—so that together we can sing a stronger, richer, more joyful song.We are inviting you all to pull out your instruments—and, believe it or not, your pie—for an evening of celebration. Wherever you live in this world, wherever you sing and dance and play, won’t you join us at 9:30 p.m. ET for the Twitter Pie Party, celebrating the merger and the community?LL Barkat explains the party:

Tuesday, October 12, at 9:30-10:30 p.m. EST, we’ll be having a Twitter party to celebrate. (Follow us at @thehighcalling. The hashtag will be #goodwork and the location is http://tweetchat.com/room/goodwork)We’ll spend some time getting to know each other, chatting about blogging and other stuff. Altogether, it should be a lot of fun.Bring your pie (bought or homemade) to the party, and a favorite hot drink, and tweet it so we can enjoy. If you want to do a whole celebratory pie post on your blog and add your link below, you can do that too. 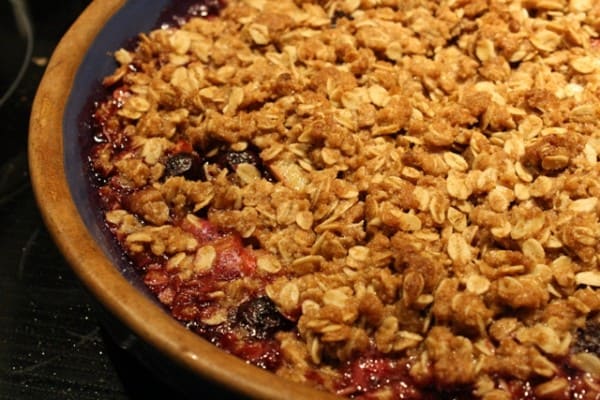 My Blueberry-Rhubarb Crisp, first-cousin to pie.