As I think back on my time with the High Calling team, memories return as a series of scenes or vignettes. These are the first few that I will simply label “Part One,” in which I appear decidedly unsophisticated.Some of the High Calling team arrived early and enjoyed a lunch together, photographed in brilliant color by Deidra in her post “Barefoot.”I arrived with the second wave of people who flew to San Antonio mid-afternoon.We all met and sorted out who was whom—this was, after all, the first time most of us met in person, and in many cases we had nothing more than a thumbnail head shot to identify our colleagues. Some people were taller than I imagined; some had different hairstyles; and some looked exactly as expected.After introductions, Marcus Goodyear divided us into teams and sent us out to explore the Riverwalk area of San Antonio by means of a photo scavenger hunt and Twitter party. My team included: Claire Burge, who, for the sake of points, boldly introduced herself to strangers throughout San Antonio and complimented them on their good work; Glynn Young, who navigated the city for us while snapping photos and tweeting; and Jennifer Dukes Lee, who laughed with me, thought up great tweets, and posed for photos.We kept passing the Alamo. 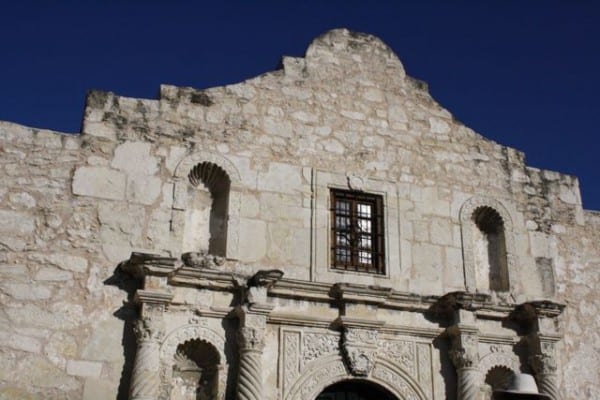 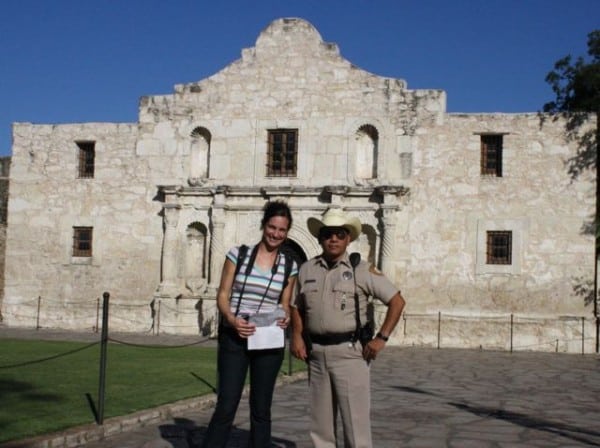 Each time we passed it, a line from “Pee-wee’s Big Adventure” went through my head. I finally said it out loud in my best Texan accent: “There’s no basement at the Alamo!”Everyone looked at me funny.”You know, it’s from ‘Pee-wee’s Big Adventure?” I ventured.They shook their heads.I was the sole person on our team who knew anything about Pee-wee Herman and the excruciatingly drawn out tour of the Alamo he endured (Tina the tour guide: “Yes, there are thousands and thousands of uses for corn, all of which I will tell you about right now.“)Now, I hadn’t thought about that movie in years. In fact, I couldn’t remember for sure if it was “basement” or “bathroom.”I found the clip on YouTube later the next day and refreshed my memory.After passing the Alamo so many times without stopping, I finally asked, “Can we please poke our heads in? I’m afraid I may never come to San Antonio again, and I really want to see what the Alamo looks like. Would that be okay? I promise I won’t take too long.”Everyone kindly agreed to pause the competition long enough to slip inside.As soon as we stepped in the door, a guide standing with security guards gruffly announced, “The Alamo closes in two minutes.””Two minutes?” I exclaimed. “I only have two minutes to see the Alamo?””Two minutes,” he snipped.”Well, okay,” I said. As I looked around, however, I realized that the chapel area was so small, I really could see the Alamo in about two minutes. We admired Davy Crockett’s vest and a collection of his rifles. We listened as Glynn shared the history of thick, heavy wooden doors that were shot through. We saw lots of plaques and flags and peered into side rooms that were under construction—presumably to create lifelike dioramas.Two minutes later, we’d pretty much seen it all.Then the guards said we had to leave.After we got kicked out of the Alamo, I wondered if I could get the locals to join me singing the chorus of “Deep in the Heart of Texas.”Again, no one knew what I was talking about.The High Calling teams reunited for dinner and compared notes. We laughed and chatted. I ate about a pound of guacamole.We finished dinner and headed to the airport to pick up one of our team members whose flight had been delayed until late. We greeted him with a fair amount of silliness and then piled back into vans and SUVs to drive to Laity Lodge.They dropped off several of us at the gorgeous building where we would share rooms. Deidra snapped some outstanding photos of the place: 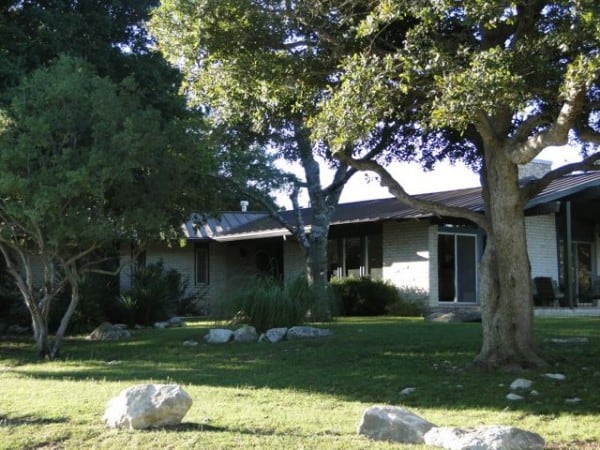 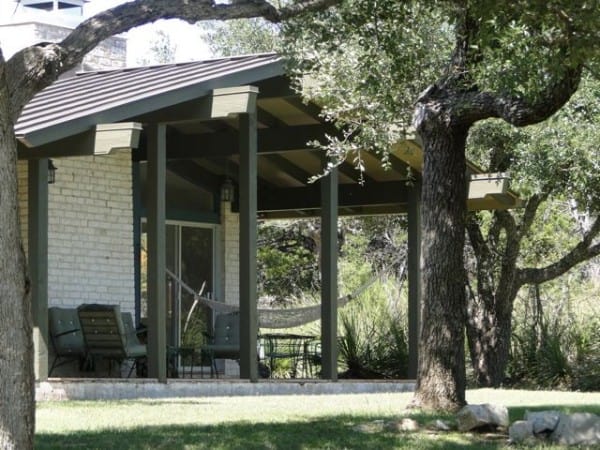 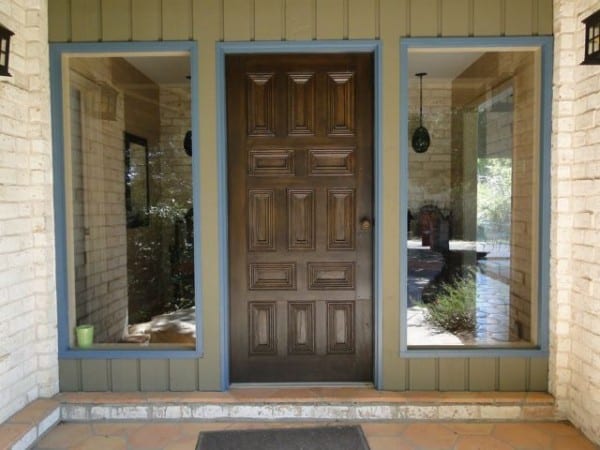 The next day, the workshop leaders and other writers arrived for the writing retreat.I walked to the dining hall with workshop leaders Lauren Winner and Scott Cairns. Scott, by the way, is a poet whose profound ideas and rhythmic prose make my brain pause and ponder; he conveys concepts so thick and rich, they take days to digest.”Hi, Scott. Hi, Lauren,” I said.They turned and looked at me, smiling, glancing at my name tag with a “Do I know you?” look on their faces.”I’ve met you a couple of times, Lauren,” I offered. “Once was in a small town in Indiana. We had coffee.”I detected a look of recognition and a nod. “Yes,” she replied. “I wouldn’t have remembered where, but I do remember meeting you.””And Scott,” I said, keeping it simple, “I met you at the Festival of Faith and Writing.” I didn’t bring up the whole business card scene. “It’s good to see you both again.””You, too,” they responded politely.I talked with someone else momentarily as we filed through the line for our food. Next thing I know, I was seated at a table directly across from Scott. Lauren sat next to him and LL Barkat sat next to her at the end of the table.We chatted about San Antonio, and I tried to explain the Twitter party/photo scavenger hunt. When Lauren turned to talk with LL Barkat, for some reason I mentioned to Scott that each time I passed the Alamo, a line from “Pee-wee’s Big Adventure” involuntarily popped into my head.Without missing a beat, Scott said, “‘There’s no basement at the Alamo!'”My mouth dropped open. “You know it?””And then there’s the big ‘but,'” he continued, quoting from another scene.* “‘Everyone I know’s got a big ‘but.’ Let’s talk about your big ‘but.'”Scott’s talk of “‘but’s” drew the attention of Lauren and LL, who turned to listen in.”Now you’ve got me,” I admitted. “I don’t remember that scene…it’s been too long since I’ve seen the movie. Even with the ‘basement at the Alamo’ line, I couldn’t recall if it was basement or bathroom.””It’s basement,” he confirmed.”But I do remember ‘Large Marge,'” I said, bugging my eyes a little for effect.”What are you two talking about?” Lauren interjected.Scott turned to her and explained that it’s a movie that came out in the ’80s and turned into kind of a cult film. “The humor’s pretty base,” he said.”You’re probably too sophisticated for it, Lauren,” I offered. Then I looked at Scott, whose profound ideas and rhythmic prose make my brain pause and ponder; who conveys concepts so thick and rich, they take days to digest.”But…” I gestured to Scott and myself, “what does that say about us?”He grinned and shrugged.

* I had forgotten the scene Scott referenced, but rediscovered it later: Pee-wee asks his friend Simone what her dream is, and she says she dreams of going to Paris, France. Pee-wee says she needs to follow her dream, and she answers, “I know you’re right, but…” It’s that kind of big “but” he’s talking about—with only one “t.”