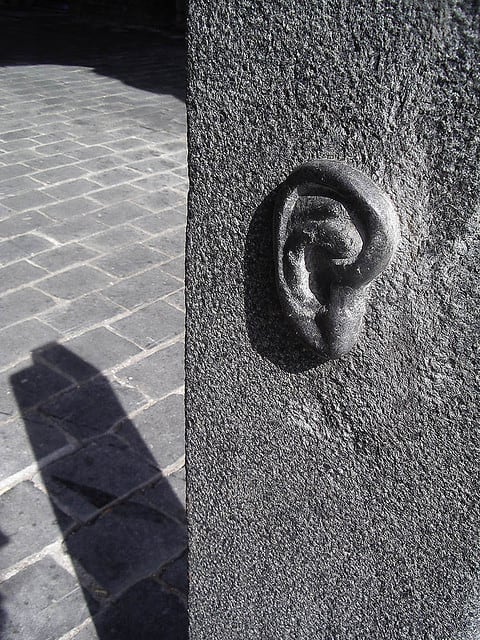 Yesterday at High Calling Blogs, Michelle of Graceful posted a story about how she was caught fake-listening to her son. As the content editor for this article, I worked with Michelle on the piece and enjoyed a sneak preview. Her topic has caused me to monitor my listening skills (or lack thereof) for a few days now.I’ve also been particularly honest and respectful in conversations with my kids, so I’m grateful for Michelle’s openness (and great storytelling ability). I’ve tried to note several things about myself:

How often do I tune in or out?This is tricky, because as a work-from-home writer and editor, I don’t keep regular office hours. Worse, my desk is situated in a large shared room with the piano and comfiest couch, so someone is often in the room while I’m tapping away. The result of this arrangement? To get anything done I have to tune out! When I need to work uninterrupted for a chunk of time, I alert the family and they have respected my need to focus.Other times, when I’m doing light editing or answering e-mails, the kids come and go with various requests. Sometimes I’m in the midst of composing an e-mail (or blog post!) and need a few minutes to finish a thought. In those cases, I ask for five minutes to finish so that I can give them my full attention. When they have something to say and I’m able to break away, I do try to swivel away from my laptop in order to look them straight in the eyes.How guilty am I of fake-listening?I grew up with a family member who told and repeated long stories. The stories dragged on and on; as a result, I developed pretty impressive fake-listening skills. I could be generating a storyline in my head and still give the illusion of listening. When I was in top form, this person seemed to believe I was completely engaged, though perhaps the speaker was also pretending—pretending I was listening to the story in order to have an excuse to continue talking. That’s possible. We humans are pretty desperate to be heard. I’m not proud of my fake-listening skills and do not want to be practicing them with my husband and kids.But I have moments. Two of my four kids in particular love to have an ear and can go on and on. I’ve had to snap to attention and get my brain lined up with their stream of words. At the same time, I’m trying to teach one of them to summarize and pick up on clues from others, especially adults, who are trying to break away–important “emotional intelligence” skills to develop in order to relate well to people. What are my canned responses “interjected at appropriate moments to maintain the illusion of conversation”?I share “Really?” “Wow!” and “Hmmmm” with Michelle as three top responses. Maybe even “That’s interesting.”But my top response is “Oh.”I like its versatility. It can be expressed with a hint of surprise: “Oh!”Or it can invite the speaker to elaborate: “Oh?” Sometimes it’s a way to communicate that I get a person’s joke or learned something new: “Ohhhhhh” (a grin and knowing nod accompany this one). In this use, the “Ohhhhhh” occasionally morphs into an “Ahhhhhh.”This handy word (or is it just a sound?) can also acknowledge that I heard them and there’s not much more to say in response other than a simple and earnest, “Oh” (or “Ah”); as in “Oh, I see” or “Ah, yes.”I’ve even noticed one of my kids picking up on this use of “Ah” as a means of acknowledging that he heard and processed my response. For example, today my youngest asked, “What does ‘promote’ mean, Mom?”“We could look it up,” I said, “but it means to cause someone to kind of move up to a better job or position. A boss can promote someone at work.”“Ah.”I admit that my use of “oh” can be a way to fake-listen. But it can also be a legitimate response after truly hearing what my child (or anyone) is saying.Yesterday afternoon I was feeling extremely tired, so I headed up to my bed to lie down for a few minutes. I was planning to let my mind wander a little in the quiet of my room.“Mom?” my son called out to me. “Mom? Where are you?”Sigh.“I’m upstairs.”He bounded up the stairs and stood in the bedroom doorway. “Can I come in?”“Sure.”He slipped to the side of the bed. “Are you okay?” he asked.“I’m fine. I just came upstairs to lie down for a few minutes. You can join me, if you like.” I folded back the covers and scooted over. He climbed in and lay there staring at the ceiling for a minute.“Percy Jackson had to defeat a Hydra in some building in Nashville, Tennessee,” he began, reviewing some key scenes from the movie Percy Jackson and the Olympians: The Lightning Thief. “And then he went to some garden where he defeated Medusa.”I was relaxed and reflective, but I was listening. “Hmmmm,” I murmured.“I think it was in Michigan,” he continued, “but I’m not sure.”“That’s interesting,” I replied.“But his mom got out of Hades and he got the lightning bolt back to Zeus.”“Really?”“Yes, and then it ended with him practicing fighting with Athena’s daughter.”“Ohhhhh,” I replied. “That sounds nice. Did he get to meet his dad?”“His dad? Poseidon? Yes, he did.”“Ah.”Same words as my canned responses, but these weren’t canned. I was listening. And in spite of how hot it was that afternoon, I let my son snuggle close and kissed him on the cheek.“listen to me…” photo by Michela Mongardi. Available under a Creative Commons license through Flickr.com.

It’s easy to subscribe to annkroeker.com updates via email or RSS feed.Visit NotSoFastBook.com to learn more about Ann’s book.