“If you wait for perfect conditions, you will never get anything done.” (Ecclesiastes 11:4, New Living Translation) 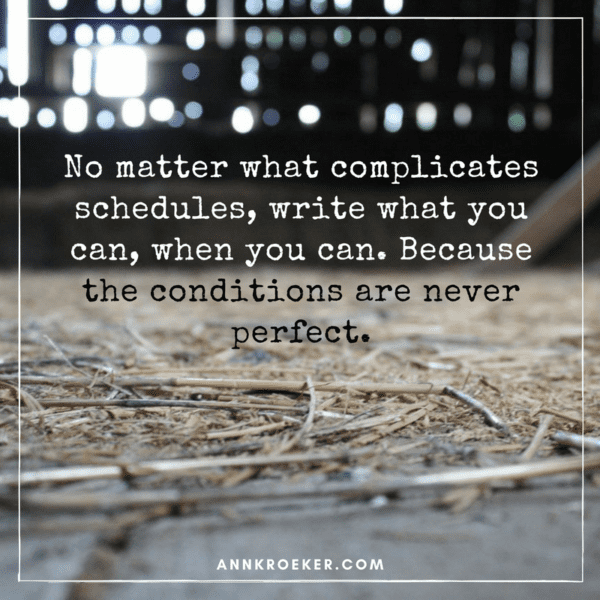 If I waited for the perfect conditions to develop my writing life, I’d still be waiting.

Back in the early 1990s, I did manage to explore writing as my work, as a way of life. I wrote and submitted a few magazine articles and met with businesses to launch a career in corporate freelance writing. Then we started our family. Our first three children were born within four years of each other (the fourth came along a few years later).

I wrote when the kids were napping. I wrote late at night. I wrote in my head when I took them for a walk to the park and scribbled down my ideas when they were eating a snack.

Sometimes I wrote well, but most of what I wrote served as compost, breaking down in my mind, heart, and spirit to feed new and potentially better ideas. Regardless of the quality of what I produced, I wrote. I practiced. I learned.

And I read. With a book tucked in my diaper bag or purse, I could steal a moment now and then to consume some new thought written by authors I respected, whose information I craved, whose ideas would feed the glowing coals of creativity that glimmered softly inside of me as I changed diapers, swept Cheerios and scraped hunks of banana from the high chair tray.

I kept the energy of writing alive during those hectic years, and when the flame flashed, I’d try to grab something on which to write, even if it meant borrowing a crayon and scribble pad that the kids were using for stick-people adventure stories.

This made for a spontaneous, messy writing life. Scraps of paper strewn on the kitchen table or nightstand represented that flash of insight I managed to scratch onto the back of an envelope. Life with newborns and toddlers required tremendous focus and energy, leaving little chance for a regular schedule. I grabbed opportunities when I could, leaving a trail of pens and paper throughout the house and shoved into cup holders in the car.

I identified with other writer-moms, such as Barbara Kingsolver. She would read about rituals of other authors who had seemingly endless time to create the writing mood—hours of photography or flower arranging before sitting at the desk to compose one word. She quoted one author who described his muse at length. Kingsolver, a busy mom with no time for flower-arranging, had to write with the time she was given. She described her own muse:

My muse wears a baseball cap, backward. The minute my daughter is on the school bus, he saunters up behind me with a bat slung over his shoulder and says oh so directly, “Okay, author lady, you’ve got six hours till that bus rolls back up the drive. You can sit down and write, now, or you can think about looking for a day job.” (p. 96, High Tide in Tucson, Barbara Kingsolver)

Kingsolver understands the limitations of motherhood and the challenge of writing in the midst of it. She quotes Lucille Clifton responding to the question “Why are your poems always short?” Ms. Clifton replied, “I have six children, and a memory that can hold about twenty lines until the end of the day.”

Clifton encouraged me to plan out my work mentally while I’m on-the-go, storing up thoughts until the end of the day, when the kids were in bed and the words could spill out.

My kids are much older now; my conditions remain imperfect but are much more conducive to writing. My children are more independent—my oldest has her driver’s permit. But it seems I still have to steal time.

Apparently the conditions for writing will never be perfect.

I need to be reminded of this again and again. Julia Cameron, in The Right to Write says:

The ‘if-I-had-time’ lie is a convenient way to ignore the fact that novels require being written and that writing happens a sentence at a time. Sentences can happen in a moment. Enough stolen moments, enough stolen sentences, and a novel is born–without the luxury of time…

This reminds me of a quote I heard at the Festival of Faith & Writing in 2010. Author Parker Palmer said:

Poets, bloggers, novelists, creative nonfiction writers, essayists, letter writers, journalists, composers; we must all get to work. Write a book, essays, paragraphs, lines, or just write a few words, but for heaven’s sake—be sure to write with your life.

No matter what complicates schedules—whether you have a full-time job or you’re a full-time caregiver—write what you can, when you can. Because the conditions are never perfect. 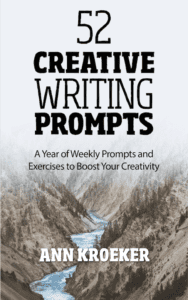 Sure, you can poke around the Internet collecting writing prompts and creative writing exercises.

Or you could buy an ebook that collects them for you in one place.