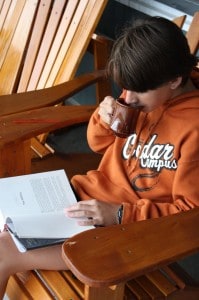 At the Festival of Faith & Writing, children’s book author (twice awarded the Newbery Medal) Katherine Paterson sat with her son David to discuss the process of transforming the story of Bridge to Terabithia from book to film. (EW interviewed David for a story about the process with some of the same information.)

David was co-writer and producer for the film. He said that it was a challenge to bring the story to film, because, “People have brought their own lives to it; everyone has his or her own idea of what Terabithia looks like. Everybody has created his or her Terabithia.”

Katherine said, “I hardly describe Terabithia at all…in the book, it just gets a few brush strokes.”

David said, “Everyone, when they read a book, they are their own filmmaker.”

Their rapport was charming. She patted him on the knee now and then, and he would reach over and rest his hand on her shoulder. He teased her for calling him by his brother’s name, and she just laughed. The whole hour was just sweet, sweet, sweet. Well, and I learned a little bit about Hollywood, and how David was firm about how the film should stay faithful to the book.

I won’t spoil it for you if I mention that somebody dies in the book, will I? Did I? Did I just spoil the book and movie? I’m so sorry, if I did. At least I didn’t tell you who.

Well, somebody dies in the book. It’s absolutely critical to the plot.

So when David was first in conversations with Disney to see if they were interested in making the adaptation of Terabithia, they said that they were, but they wanted to change a few things. The fact that the character dies was a big bummer…instead of dying, could the person just break an arm? Could the character fall into a coma and almost die?

Uh, no. The character has to die.

Well, they weren’t interested in that. Finally he was able to get someone to listen and understand that the story was the star–the story was everything–and they agreed to stick with the story and make a faithful adaptation.

And the character dies.

But a problem with that was the trailer. The footage created to promote the film looked like a fantastical adventure–no mention of death–and they got phone calls and e-mails from irate parents who went to the film not knowing what they were in for. One dad was so upset that he took his kids to the movies, and then he was stuck actually having to talk about death with his children. He was livid. And both Katherine and David were thinking, “Hm, maybe it’s about time he had a conversation about death with his children. Maybe more parents need to talk with their kids about these difficult topics.”

Uh, yeah. I agree. I mean, if I didn’t know that a character would die, I might have been frustrated as well. I like to be prepared. So maybe it’s good that I told you, too, so you’ll be prepared if you rent it, to talk about death with your kids. But these conversations are important. Hard, but important. If literature and film can help us talk about hard issues with our families, that can be good.

Katherine said it well. “Children’s books give kids a rehearsal for what life will be.”

She restated it two more times. “Books can give you a rehearsal for the hard things in life. When we lose someone to death, those books can come back to us years later and be a comfort to us.”

She told a story about a letter she received from a man who explained that someone dear to him passed away, and he happened to revisit Bridge to Terabithia because he remembered it from childhood. Reading the book as a child, he sensed its power and it stuck with him. Reading it as an adult who recently lost a loved one, it was a source of comfort to him. “If he hadn’t had it when he was ten,” she said, “he wouldn’t have had it when he was 21.”

Again, “Don’t censor hard books because they’re hard; because hard books help to prepare you for the hard things in life.”

She said, “If a book has any power, it has the power to offend. It also has the power, maybe, to mean something to people’s lives.”

She told about the trouble with discussion questions and study guides created for her books over the years. Some are good, some…not so much. To illustrate, she told the well-known story about a little boy in Sunday school whose teacher asks, “I’m thinking of an animal. It’s brown and fuzzy and climbs trees.”

“It’s got a fluffy tail,” the teacher continued. Nothing.

“It collects nuts and stores them for the winter!”

Finally, a little boy speaks up and says, “Sure sounds like a squirrel to me, but I know the answer must be ‘Jesus.'”

She used that to make the point that questions need to be real questions. “We need to be careful not to ask questions for which we already know the answer. We need to ask genuine questions.”

She urged us, “Ask the question you have about a book. If we ask a question and don’t know the answer, some really exciting dialogue can open up.”