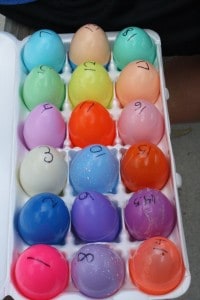 We used the Resurrection Eggs (evidently ours is an older model) again this year in our family devotions. Someday I’d like to make my own, actually, as I’d add a lot more eggs with additional symbols for a richer story. I suppose the whole idea could seem a little cheesy, but the kids love them, and the important thing is that it keeps them focused as we read the Scriptures.

We bought pre-fab Resurrection Eggs made by Focus on the Family: Twelve eggs hold twelve items symbolizing some aspect of the Easter story, beginning with a little metal donkey for Palm Sunday.

Taking turns, the children opened an egg and read the appropriate portion of Scripture, then we talked about it.

As if experiencing Easter deja vu, we assigned the last egg–the empty egg–to The Boy, just as we did last year.

“I wonder what’s in it?” he says in a dreamy tone. Pop. “Awww. It’s empty.” He screws up his mouth in an exaggerated grimace and wrinkles his nose. Is he faking it for effect, or does he truly not remember? “What’s supposed be in this one?”

“Empty. Look!” He holds them out for us to see total emptiness in the blue shadows of the egg’s interior.

“What else was empty on Easter?” one of the older sisters poses in a leading tone.

His eyes light up. “It’s empty…like…the tomb! ‘He was raised on the third day according to the Scriptures!'”(Wow, do I love AWANA Bible memorization!)

We turned to each other and took turns saying, “He is risen,” so the next person could respond, “He is risen indeed!”

We read on through Doubting Thomas. I love the last few verses of that section:

Then Jesus told him, “Because you have seen me, you have believed; blessed are those who have not seen and yet have believed.”Jesus did many other miraculous signs in the presence of his disciples, which are not recorded in this book. But these are written that you may believe that Jesus is the Christ, the Son of God, and that by believing you may have life in his name.

I have not seen, yet I’ve believed. I’m so thankful that the words are written that I may believe that Jesus is the Christ, the Son of God, and that by believing I may have life in his name.

And so may my kids. It was a very simple Easter, but full of Truth.

Tomorrow I’ll move on to blog about writing and books I’ve read and other types of posts, but I wanted to wind down my Easter weekend on Easter Monday by sharing a piece of our family story with you.

The egg–the tomb–is empty, and we can, by believing, have life in His name.